As is our tradition at Hard Bargain we again feature plays that are off the beaten path, plays that ask questions and allow our patrons to come up with the answers. Performances will be held at the Theater in the Woods unless otherwise noted.

Theater in the Woods is an outdoor amphitheater and the Hard Bargain Players perform rain or shine. Shows are only canceled in the event of severe weather conditions. There is limited covered seating and umbrellas are encouraged. Comfortable clothing and bug spray are also highly recommended.

Plays are subject to change based on availability of royalties and other factors beyond our control.

Making a reservation is as easy filling in the form on the website under “Ticket Information & Reservations” or by sending an email to hbplayersboxoffice@gmail.com. Please be sure to include the show, date of performance, and number of tickets you are reserving.

William Shakespeare finds himself between a powder keg and the crown in this brilliant new play by Bill Cain that premiered at the Oregon Shakespeare Festival in 2009.

Performances are Fridays and Saturdays at 8:00 pm.

England, 1605: A terrorist plot to assassinate King James I and blow Parliament to kingdom come with 36 barrels of devilish gunpowder! Shagspeare (after a contemporary spelling of the Bard’s name) is commissioned by Robert Cecil, the prime minister, to write the “true historie” of the plot. And it must have witches! The King wants witches! But as Shag and the acting company of the Globe, under the direction of the great Richard Burbage, investigate the plot, they discover that the King’s version of the story might, in fact, be a cover-up. Shag and his actors are confronted with the ultimate moral and artistic dilemma. Speak truth to power—and perhaps lose their heads? Or take the money and lie? Is there a third option—equivocation? A high-stakes political thriller with contemporary resonances, EQUIVOCATION gallops from the great Globe to the Tower of London to the halls of Parliament to the heart of Judith, Shag’s younger daughter, who finds herself unexpectedly at the very heart of the political, dramatic and—ultimately—human mystery. 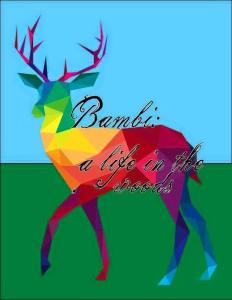 Bambi: A Life in the Woods

Based on the story by Felix Salten, Adapted by James DeVita

Performances are Fridays at 8:00pm; Saturdays and Sundays at 3:00pm.

Here for the first time is a stage version of the original story of Bambi written by Austrian novelist Felix Salten in the 1920s. Bambi: A Life in the Woods is an eloquent and haunting tale of growing up in a superbly theatrical and sensitive work of theatre, appealing to children and adults alike. Bambi becomes heir to his father, the great prince. After Bambi encounters and masters for the first time the novel feelings of love, fear, loneliness and independence, he comes to understand that all of Earth’s creatures are guided by a greater force than themselves—all are dependent on each. Intertwined in this great story is Bambi’s growing awareness of the fragility of the forest environment and the impact of human encroachment on all of the forest inhabitants.

Performances are Fridays and Saturdays at 8:00 pm.

In a small bar called The Weir in a rural town in Ireland, three local men are settling down for the night, enjoying good beer and company. Their normal routine is shaken up when their friend Finland enters the bar and introduces them to Valerie, an attractive woman from Dublin who has just moved into an old haunted house in the town. As the night (and the amount of liquor) progresses, each local from the bar starts to tell a tale of ghostly happenings in the town. What starts as innocent braggadocio between the men turns into a real fright when Valerie reveals a real, haunted tale of her own from the past. Examining chances of missed opportunity and the loneliness that results in it, The Weir is a haunting play with its roots in Irish folklore.

PAST SHOWS for the 2017 Season

THE NORMAL HEART
By Larry Kramer
Benefiting the It’s All About the Love Scholarship and the American Foundation for AIDS Research
Directed by Matt Jameson
Sunday, June 25, 2017 at 7:00pm